I really like Marc Miller. He’s one of the friendliest – and most knowledgeable – men I ever met.

We got connected in 2011, when he was busy setting up his website www.98bowery.com, which he described to me like this: "The gallery's focus is the artist group Collaborative Projects Inc (Colab) and the two alternative spaces that were started independently by different members in the group:  Fashion Moda in the Bronx and ABC No Rio in the Lower East Side. Colab was interested in new ways of showing and distributing art. Many of the items in Gallery 98 Bowery (the address where Miller lived for more than 20 years)  - like Christy Rupp's rats and Anita Steckel's print --were originally produced for a series of temporary stores that Colab mounted in the early 1980s. The idea was to make low price artist multiples available during the Christmas gift giving season. In most cases the items were open editions.  However, few (if any) of these items were produced in any great quantity. We are currently selling originals that were either bought from these stores or were not sold at the time and kept in storage."

Marc introduced me (literally) to Arturo Vega (aka the 'fifth Ramone, responsible for the bands logo and merchandise, and a great artist himself: my wife Manuela Klerkx and I hosted an exhibition with Arturo's 'pop paintings' in Amsterdam - the result of our meeting in 2012) and to Anton van Dalen, a wonderful artist - originally from Holland, rooted in the eighties - who has chronicled the evolution of Manhattan's East Village over the past five decades. Van Dalen, who worked alongside and collaborated with the likes of David Wojnarowicz, Martin Wong and Keith Haring, has lived in the same apartment on Avenue A since he first rose to prominence as a street artist in the'70s and '80s, continually creating paintings, drawings, and collages that document the neighborhood's changes. Miller also introduced me to Clayton Patterson, a Canadian-born artist, photographer, videographer and folk historian. Since moving to New York City in 1979, Patterson's work has focused almost exclusively on documenting the art, life and times of the Lower East Side in Manhattan, and to Curt Hoppe, the fabulous photorealist painter, who has been working on (bigger than) life sized paintings of famed Lower East Side artists (including Arturo Vega).

Marc Miller has been instrumental in getting (forgotten) artists from the eighties the recognition they deserve. His online gallery www.98bowery.com is not only a great source of information for anyone interested in New York counterculture and activist art, but he also has been hosting some great (online) shows: from 'rectal artist' Neke Carson to digital pioneer Anton Perich, and from Colette to Tom Otterness. I mean, how cool is this item: "Rectal Realism Documentation 1973 / 2013: Neke Carson and Anton Perich, Rectal Realism Documentation, includes: Set of 4 photographs by Anton Perich documenting Neke Carson’s rectal realist portrait of Andy Warhol. 8 x 10 in. each. 1973 / 2013.

The photo of the finished painting.  Warhol commented: "Oh, it looks great."

(A statement about rectal-realism signed by Neke Carson)

It is all very DIY and very eighties in its approach - I love it.   In 2012 Miller 'exhibited' Tom Otterness’ Zodiac Love series, 1982-87. First marketed in 1982, each of the twelve small-scale, plaster sculptures in the Zodiac Love series were priced at $11.95. While initially conceived as an unlimited multiple edition, in fact only few of these sculptures were actually sold and they have not been produced since 1987. I bought some works from Miller in the past, because I love pioneers (especially from the eighties), and Anton Perich certainly is major pioneer:

Check out this man, who invented the 'painting machine' long before Wade Guyton made name (and fame) with his printed paintings.

"Anton Perich came to New York in 1970, drawn like many young artists at the time by the mystique of Andy Warhol.  A Croatian by birth, Perich was fresh from four years in Paris where he was part of the avant-garde Letterist art movement, and learned about Warhol through his job organizing weekly film screenings at the American Center in Paris.  His rise in New York was remarkably swift.  During his first visit to the artist bar Max’s Kansas City, Perich gained access to its fabled backroom, where he met Warhol who recruited him as a photographer for his new magazine Interview.  He soon also took up video, acquiring a small portapak video camera, and starting a weekly public access cable television show that often featured stars from the Warhol circle.

Usually identified as a photographer and video artist, another side of Perich’s creativity now commands attention.  Working with video inspired Perich to make paintings that mimicked the look and feel of television images.  A childhood tinkerer and an aspiring inventor, Perich achieved success in 1977 by creating a machine that automatically produced a sequence of lines with an airbrush activated by a photocell reacting to the lights and darks of projected images.  Over the next 35 years Perich has continued to work with and refine his painting machine.  Because it allows for artistic choice and the option to intervene, the paintings that result have a wide diversity and range from representational to abstract.

For Perich the electronic paintings are rooted both in the Letterist’s experiments in communication and in Andy Warhol’s famous pronouncement about wanting to be a machine.  Initially greeted with cynicism in the 1980s, his paintings are now receiving new attention as artists increasingly incorporate the technological advances of the 1990s into their work.  Technologically, Perich’s machine has been identified as the precursor of the ink-jet printer. Artistically, his paintings are the predecessors of the new technologically-based art making of contemporary artists like Wade Guyton." 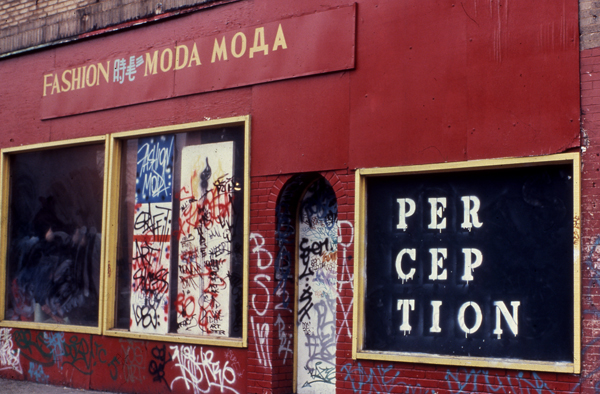 (Stencils by John Fekner on the Fashion Moda front, around 1980)

It's great to see the Fashion Moda spirit is still alive and kicking, and I am pleased that many of the artists participating have been supported by Miller over the years. Back to the man himself. On his website, Marc wrote a short biography, which covers the years 1969 - 1985, and is an interesting read itself: "In the late 1960s New York was the place to be if you were interested in the arts. I came from California to pursue a graduate degree in art history at New York University's Institute of Fine Arts. The art world's striking extremes were quickly revealed. The Institute's elegant quarters in the Doris Duke Mansion on Fifth Avenue and 77th Street provided a glimpse of a rarefied world of masterpieces, scholarship, and Friday afternoon teas, while my tiny $65 a month, cockroach- infested, studio apartment in Greenwich Village reflected the grittier realities of downtown's art scene. During those first months in New York, my one companion was John Wilmer, another Californian who had just moved east to study at the School of Visual Arts. It was John who first rented the top floor loft at 98 Bowery, but before he moved in, the grind of life in the city got to him, and he retreated back west. By this time I was living with artist Carla Dee Ellis in a small $110 a month village apartment. Seeing an opportunity, we eagerly grabbed the spacious loft for $175 a month.

I came to New York to study art history but the creative energy of the top floor loft at 98 Bowery awakened my latent artistic ambitions. At first I tried painting, but when Mike Malloy exposed me to a new form of art rooted in exploring human psychology, I became an instant convert. Over the next decade I became a "conceptual artist" actively creating and exhibiting mixed media wall pieces, videotapes, and staging performances in America and Europe. Almost all of my art focused on people, their lives, thoughts and feelings. Most of the pieces involved the actual participation of people in the making of the art. Participants were asked to respond to words, make simple drawings, take photographs, or provide hand-written captions for photographic portraits. Some of the pieces dealt with the mundane realities of daily life; other works explored hot button issues like sex, money, religion and politics. They walked the thin line separating art and life. Because many of the participants were people I knew personally, the art was also a record of my own life.

Every time Bettie Ringma and I headed north on Bowery towards the East Village, we passed a grungy bar that clearly had the feel of a happening scene. Curiosity pulled us into CBGB in 1976, and for the next three years the club was our regular haunt, a place we visited three or four times a week, meeting friends and absorbing inspiration as we watched the emergence of a new music and counter-culture scene that would soon spread around the globe. More than just a music revolution, punk also affected the visual arts, fashion and design. Under the sway of punk, our conceptual art grew and evolved in ways that reflected the style, content and marketing of the broader CBGB scene. Like a rock group, we were an art group, first billed as Miller & Ringma and then as Miller, Ringma & Hoppe when Curt joined our collaboration. In 1978 we brought together the visual artists at CBGB by organizing the world’s first "Punk Art" exhibition in Washington DC. For us the punk years were fast, loud, and lots of fun.

Bettie and I returned to the Bowery as the American correspondents of the Dutch magazine Nieuwe Revu. Increasingly, we saw ourselves as journalists and our next project "Unforgettable Moments" was conceived as much for publication as for exhibition. Much had changed in the year we had been away: the East Village was now filled with art galleries, and many of the people whom we had worked and associated with in the Punk Art show were now leaders in the evolving scene. I collaborated with Alan Moore on a book about ABC No Rio, an innovative alternative art space he helped start in the Lower East Side. I also began working on ART/new york, a video magazine about art started by Paul Tschinkel. The first program we did together was on "New York/New Wave," an exhibition curated by Diego Cortez that expanded on the idea of Punk Art. In addition, I had a monthly column, "Miller's Memorabilia" in the East Village Eye, the new voice of the scene."

(MM & JMB, the interview was originally done for the ART/New York tape "Young Expressionists"(1983). The Basquiat sequence featured his much-acclaimed exhibition at the Fun Gallery.)

(MM & JMB, A short sequence from the Jean-Michel Basquiat interview was also included in the ART/new york tape "Graffiti/Post Graffiti" (1984)

Marc Miller was longtime friends with a Dutch woman called Bettie Ringma. They made some great polaroids in cafes and bars on the Zeedijk in Amsterdam, and staged, in 1979, a punk art show in Amsterdam. Here's what Miller wrote about that period:

"It was in Spring 1979 that Bettie Ringma and I moved to Amsterdam. After five years in the United States Bettie was happy to return to her native country and I was eager to learn more about her culture. In Amsterdam we lived on a houseboat on the Prinsengracht right opposite the Anne Frank House. Karen Kvernenes who ran the gallery and bookstore Art Something asked us to mount a small version of the Punk Art we had organized in Washington D.C.. For money, Bettie and I started selling instant Polaroid portraits in the city's bars and clubs. When Polaroid Corporation gave us free film to take second shots, Karen helped us organize the exhibition Amsterdam Privé. A large spread of our bar photos in the popular weekly magazine Nieuwe Revu was the first of many articles they commissioned that allowed us to translate our art ventures into popular journalism."

To end, here's Marc with some of his best friends in the New York art world.