"You should always have a product that is not you." Andy Warhol   Until saturday may 23rd, I had never heard of Vern Blosum. Then I read this fascinating piece in the New York Times, and knew I had to check out his show  "Late Works" at Essex Gallery.

According to the New York Times, 'In the early 1960s, many Modernist abstract painters reacted to Pop Art with fear and loathing. One of them, using the pseudonym Vern Blosum, expressed his annoyance by perpetrating a hoax. From 1961 to 1964, he produced about 45 Pop-style paintings of images similar to the drawings in this exhibition. The art world was snookered. The art dealer Leo Castelli, reportedly unaware of the deception, represented Mr. Blosum. His paintings were included in numerous Pop Art shows, big-name collectors bought them and the Museum of Modern Art acquired one. Then rumors of Mr. Blosum’s nonexistence began to circulate. Anxious that he might be found out and his reputation as a serious painter damaged, the artist ended his project and it fell down the memory hole — until 2013, when examples were shown at the Los Angeles gallery Tomwork and at this (Essex Street, OvG) gallery in the East Village. Last year, the Kunsthalle Bern in Switzerland mounted a Blosum retrospective. These developments inspired the artist, whose real name has not been publicly revealed, to resurrect his avatar.' 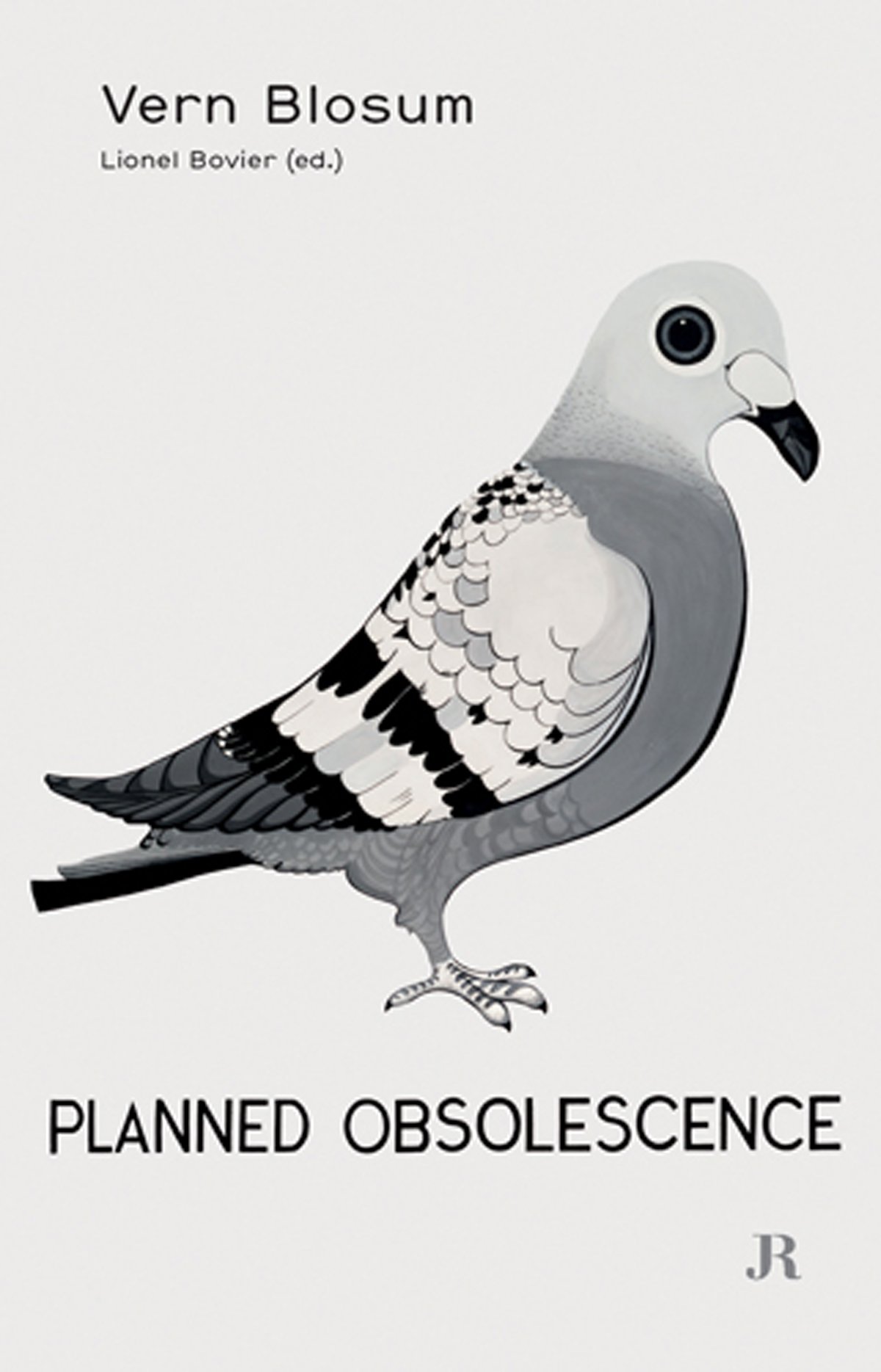 He painted 'everyday technologies and signage of the modern city. Images of stop signs, parking meters, fire hydrants, and mailboxes combine with hand-painted words beneath each representation that reference the images in various degrees.'

Besides the work Telephone, I love the parking meter series, with different amounts of time remaining: from Zero Minutes (1962) to Fiftyfive Minutes (1962), ending with Giant Expiration (1963), and, of course, a work called Out of Order (1962).

On the photograph we see the smart collector/dealer/gallerist Maxwell Graham (who has been instrumental in getting Blosum rediscovered) talking to visitors, and at the wall 10 of the 11 works (pencil drawings) on display, all made in 2015. Here are the titles:

Now, who was Vern Blosum?

'“Vern Blosum” is a pseudonym used by an obscure abstract painter intent on exposing the grand farce of what was known then as “New Realism,” “Pop,” and “Common Object Painting.” Blosum’s true identity remains a mystery, known by only a few, but some biographical facts have emerged. We know, for example, that he studied painting briefly with Adolph Gottlieb at the University of California, Los Angeles, attended Hunter College’s graduate art program, and created Pop paintings for only three years, 1961–64.

Blosum’s connection to the Abstract Expressionist Adolph Gottlieb is significant in understanding the artist’s work. As a movement, Abstract Expressionism relied on the painterly gesture (the visible brushstroke) as both an actual mark and a symbolic marker of the artist’s heroic presence; the gestural brushstroke was the trace of authorial authenticity (not just its representation) leading directly to the historical figure of the artist. Pop art, including Blosum’s, attempted to puncture these pretensions by insisting on banal representations and the utilitarian mark of the sign painter or the mechanical imperfections of the printing process. Blosum, an Abstract Expressionist by training and practice, armed himself with the anonymity of a pseudonym in order to reveal what he saw as the shallowness of Pop art.'

The fact that Blosums work sold, was widely exhibited, acquired by museums and found immediate success should have paved the way for a bright future. But then, in 1965, something unexpected happened: 'If Blosum’s practical critique—the making of Pop paintings literally too good (or bad) to be discovered—failed to disturb the movement, his Trojan horse, it turns out, was not to painting, but rather to the museum’s (and art history’s) reliance on the artist’s identity as a guarantor of “authenticity,” the same authenticity at stake in the gestural brushstroke of the Abstract Expressionists. MoMA acquired Time Expired in 1963. A standard collection questionnaire sent to Blosum later that year went unanswered, but it was not until 1965 that MoMA director Alfred Barr was troubled enough to try to get to the bottom of the problem. In a letter to Leo Castelli, Barr stressed the need to straighten out any confusion about the artist’s identity and for the museum to have an accurate record: “Hoax or no hoax, I like the painting which is now on view—but our catalogue is a serious record.”  In response to Barr’s inquiry, Blosum sent the museum (via Castelli) the following biographical information:

Born in Denver, April 29, 1936 Parents died at early age, moved from relative to relative First real job was running cars into Mexico for resale Later became a used car salesman No formal art training, learned all I know from a friend, who taught me the fundamentals and encouraged me to paint. After five years of intensive work, I moved to South Elgin to be near my friend. My hobbies are lying and reading. I had a plane but lost it when I decided to devote my full time to painting and couldn’t make the payments.

Remarkably, Blosum’s vague response placated Barr for a bit, and the museum exhibited Time Expired throughout the 1960s. Undoubtedly, Blosum’s veiled biographical information would never have passed for so long without the security of the artist’s Castelli connection. Blosum had Castelli’s provenance, which carried the weight of such canonical artists as Willem de Kooning, Cy Twombly, Robert Rauschenberg, Frank Stella, and Andy Warhol—all of whom, by the way, were comfortably in MoMA’s collection with fully verified bios. By 1973, however, the museum demanded further proof of Blosum’s true identity and, after unsuccessfully attempting to obtain Blosum’s birth certificate, permanently removed his work from view. From purchase to removal, the process took ten years.'

'“Hoax or no hoax,” MoMA was obviously more concerned with verification of the artist’s identity than the sincerity of his work. If Blosum had just come forward with his real name, Time Expired might have remained on display. At the same time as the Blosum/MoMA struggle, poststructural theorists sought to fully understand modern culture’s reliance on the author as the focal point of a work’s meaning. As Roland Barthes explained of modern criticism’s elevation of the author (artist) over all else, “the Author is thought to nourish the book, which is to say that he exists before it, thinks, suffers, lives for it, is the same relation to antecedence to his work as a father to his child.” Blosum’s refusal to expose his true identity disallowed such artist veneration, disrupting the ability of the museum (and art history) to validate the work’s true value. Even movements like Pop that seemingly challenged the heroic artist-figure of earlier art history still relied on the identifiable personas and styles of its participant artists as determining factors in their success. Warhol is the best example of the paradoxical Pop artist/anti-artist figure. Blosum’s anonymity, once discovered, actively disrupted the requisite veneration of the artist as either a contributor or critic of Pop and, thus, his deaccession from the movement’s history. Ultimately, there is no R. Mutt without Marcel Duchamp. The parking meter works, with titles like Time Expired, Zero Minutes, Fifteen Minutes, and Out of Order, refer not only to the car as a metonym of modernist progress, in this case stalled and expiring, but also to the artist’s desire for Pop to be finished. His final Pop painting, Stop (Department of Traffic) (1964), was the clearest indicator of the artist’s resignation to this fate. He explained recently, “I didn’t need to go any further. I felt that I had fullfilled all of my predictions…. Some of my friends were achieving success—they were overwhelmed with their success. What the hell does that have to do with painting? I was too much involved with learning my own identity through painting, rather than trying to paint an identity for somebody else to buy.”

Blosum’s side in this culture war has long surrendered. The question remains as to why he never came forward to expose his grand hoax. Instead, he walked away from the whole mess. We can only imagine what effect might have resulted if Blosum had proclaimed deï¬antly in response to MoMA’s questions: “Chew on this, you lapdogs of market whim! How does it feel to fall for the most obvious, valueless art of all time?”