I never thought much of neon art, and when I did think about it, which did not happen very often, I always thought it to be a bit silly. Emin, Nauman, Flavin, Creed, Kosuth, yes allright, some stuff I digged and I could see the beauty (or the poetry) of Nauman's work, but it somehow always felt too clean, too manufactured, too soulless. I always associated neon with the Reeperbahn in Hamburg or teenage hooker Christian F. hitting  Bahnhof Zoo, or snackbars and shoarma joints on the Damrak, the sleaziest street of Amsterdam. And sex shops in the Soho area. The only positive association would be with that beautiful Kraftwerk track Neon Lights:

And at the fall of night

This city's made of light

Then, by accident, I came across a striking neon artwork posted on Facebook by my distinguished friend (and soulmate publisher) Jamie Byng. He wrote on Facebook that he had seen it in a gallery on Brewer Street, but forgot the name of the artist. Coincidentally I was in London that day, and had lunch with Jamie. I asked him about the show and soon knew enough, I had to go there. When I returned to Amsterdam, I wrote about the show at the gallery - called Lights of Soho - and about some of the works I had seen there, but I kept one name out of the blogpost: Chris Bracey. (Chris Bracey at Gods Own Junkyard)

How could I not have thought of this before? Neon is thé perfect art form to connect high and low culture: from sex shops to fairgrounds and from amusement parks to gambling halls, it is all about attracting visitors, stimulating crowds and consuming & selling. And isn't that exactly what all good art is all about: to attract, to stimulate and to sell? Bracey is the man who (more or less) put neon art on the map, making it sexy (literally) and cool. He founded Gods Own Junkyard in Walthamstow, London, which houses his life's work and constitutes the biggest collection of neon lighting and signage in Europe. The alluring warehouse crammed with neon is as much a gateway into the future as it is a step into the past. In the past, it has served as the backdrop to editorial shoots for Vogue and brands such as Urban Outfitters. Bracey said this about Gods Own Junkyard, in an interview with GQ Magazine:

"I employ 18-20 people. It's not zero hours, I haven't got any interns - I don't do all that bollocks. People get paid every week. People get holiday pay and it's 'how many hours do you want to work?' I've always got another big project on the go. I'm coming up to the big rush now because I've got a big contract to turn Selfridges into Christmas which I generally do every year. Then it goes up to about 35 people. I'm also working on a show for Moscow with the Spring gallery for December. I'm meeting a Saudi princess on Tuesday about a show in Saudi Arabia - then Los Angeles is burning bright, New York and in London stuff is selling like hot cakes. The neon art is selling quicker than a pair of used whore's drawers in a Paul Raymond peepshow on a Vicars day out in Soho! Can't make it fast enough - which is brilliant - but you've actually got to have a place you can make it." And this: "Whereas you might have a photo album, I've got a 40 year junkyard full of stuff I've made for movies, for David LaChapelle and movies like Batman, Superman, Mona Lisa and Captain America. It's all over there, just lying around and it's nice for people to see it. It doesn't say what it is, I know what it all is, I find it quite interesting that people look at things and go, "Wow I know where that's from on". You've got rusting stuff that's worth £100 next to something that's worth £25K. I've got this shed called The Joy Shed which has got my son of a gun Jesus statue in there with neon guns in there. Schoolkids love it but it's a bit of an adult toyshop. You wouldn't want to come in there on drugs, 'causeyou'd spend a lot of money. I had a bloke came in last week from the city, tanked up on charlie. I said "You've only got 10 minutes, we're closed." He spent £1000 a minute but he went away happy." The Guardian wrote, in its obituary (Bracey passed away in november 2014, at the age of 59):

"Leaving in the early 70s, he went to work for the family firm, Electro Signs. Fairgrounds and amusement arcades soon palled, and he moved into making neon signage for Soho sex shops and clubs. “I did hundreds of sex places over the next 30 years,” Bracey cheerily said. “I used to make up the words, the colours, the names – Rude Encounters, Dreaming Lips, Pink Pussycat, etcetera.” Among his more memorable creations was his first, the long-lived Girls, Girls, Girls sign outside Paul Raymond’s eponymous Revuebar.

Bracey’s year at art school had widened his horizons, however. In his 40s, he was astonished by an exhibition at the Hayward Gallery of light pieces by the American artist Bruce Nauman. Works such as Nauman’s The True Artist Helps the World by Revealing Mystic Truths opened Bracey’s eyes to the potential of neon for art-making. 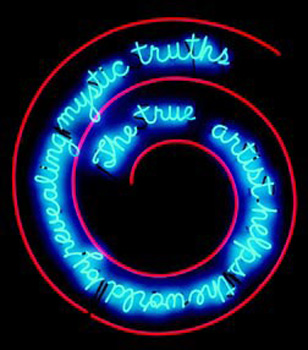 Following a chance meeting in the 80s with the art director of the film Mona Lisa, in Soho – Bracey was putting up a sex shop sign at the time – he had begun to make neon props for movie sets. His work can be seen in films as diverse as Batman, Blade Runner and Charlie and the Chocolate Factory. The Rainbow Fancy Dress and Sonata Jazz Café signs in Stanley Kubrick’s Eyes Wide Shut are both his: they now form part of the 700-strong collection in the Walthamstow workshop-cum-neon-museum. But it was neon as an art form that captured his imagination, and shaped the last part of his career. (The Power and the Glory, now on view at the Lights of Soho gallery)

Nauman was not the only artist to use neon signage in his work. Many in the Britart movement have done so, too: Tracey Emin’s You Touch My Soul is an example, as is Martin Creed’s Work No 291. Unlike Bracey’s signs, however, these are concepts made into objects by other people. Bracey did all the work himself, or with the help of his team of neon men at God’s Own Junkyard. For all their apparently easy glitziness, many of the pieces made in the workshop were deeply complex. Among other materials that Bracey liked to work with were gold leaf and Murano glass. An experiment using radioactive krypton gas instead of neon nearly led to disaster. (Tracey Emin, You Touched My Soul) 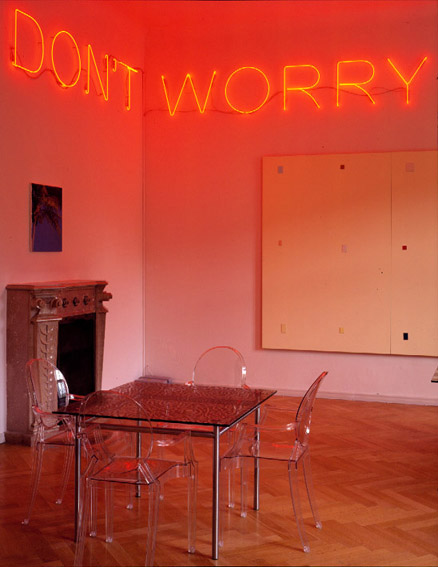 He also made pieces for artists who were too busy being conceptual to make them themselves: Creed’s Work No 232 (2000), a white neon sign at Tate Britain that read “the whole world + the work = the whole world”, was fabricated by Bracey, as were others of Creed’s artworks. Such are the vagaries of the art market that Creed’s two-word sign, Don’t Worry, sold at auction in 2012 for £40,000, while Bracey was paid just £15,000 for Vegas Supernova, a complex suite of neon pole-dancers he had made for the windows of Selfridges. Even this price, unusually high for his work, may have reflected the fact that it had been done in collaboration with the American photo-artist David LaChapelle. If this disparity bothered Bracey, he did not let it show. He remained friendly with many of the artists he worked for and with: his erstwhile Walthamstow neighbour, Grayson Perry, was a frequent visitor to the Junkyard. With its mix of skill, loucheness and Hollywood glamour, Bracey’s work developed a celebrity following: Jude Law, Kate Moss, Elton John and Lady Gaga were all collectors. (Chris Bracey, The Hands of God)

The Neon Man had also become something of a celebrity. To his amusement, some of the sex signs he had made for Raymond were recently bought by a museum in Berlin. In 2012, he was given shows at the Los Angeles and Miami galleries of the contemporary art dealer Guy Hepner, and last year he had his first London solo show, I’ve Looked Up to Heaven and Been Down to Hell. “It’s how my life’s been, I suppose,” Bracey said of the title."

It was great to see two iconic Bracey works at the "City Lights" group show at Lights of Soho: The Power & the Glory (hanging in the window) and the collaboration Boogie Nights (with Christian Furr). They also did a show together called Staying Alive: here's a great video.

Soho has always been the entertainment district; for much of the 20th century Soho had a reputation as a base for the sex industry in addition to its night life and as a location for the headquarters of leading film companies. Since the 1980s, the area has undergone considerable transformation. It now is predominantly a fashionable district of upmarket restaurants and media offices, with only a small remnant of sex industry venues. (Chris Bracey, Lucy in the Sky with Diamonds)

When I stepped out of the gallery I took two photographs: one of the gallery, with The Power & the Glory displayed in the window, and one of the sex shop next door. It did not have a GIRLS GIRLS GIRLS sign on it, but it made me smile: art is all about context. Chris Bracey made the transition from sex shop to gallery: they are only six steps away from each other. Go and see “City Lights” if you can, it runs till july 19th, and Lights of Soho is located at Brewer Street 35 in London.